How to Bake Pi by Eugenia Cheng

Title: How to Bake Pi: An Edible Exploration of the Mathematics of Mathematics
Author: Eugenia Cheng
Publisher: Basic Books
Format: Print
Rating: 4 out of 5
How I got it: Received as a gift

This is something I don’t really talk about much, but when I was a kid, I used to be a mathlete. I remember that in grade 4, when I first really got a grasp of my multiplication and division tables, I would race through the timed math tests my teacher Mr. Owen gave us. We were given a sheet with between 60 and 80 short questions on it, and tried to finish as many as possible in 5 minutes — and I would finish the entire sheet and get either a perfect mark or a single question wrong.

In grade 5, that skill went even further and I actually took part in our school’s math team, competing in small math competitions with other schools. Grades 7, 8, and 9 were challenging with the introduction of algebra, but I still did well, from what I can recall.

Then it all fell sort of off a cliff in grade 10. I got 60s in my math classes. Grade 11 was a bit better — for some reason, I loved trigonometry and I was really good at it — but grade 12 was just as stressful. I finally convinced my mother that trying to take even more math classes in OAC was a lost cause. And that was the end of my math career.

I tell you all this because I find the topic  of math fascinating but intimidating. Since finishing high school, I’ve always been haunted by one little question: was I really that bad at math, or did the socialization pressures of adolescence and the enforcement of gender norms finally have their way with me?

This question of gender and mathematics is one of the things that makes Eugenia Cheng’s How to Bake Pi such an interesting read. Although Cheng doesn’t discuss gender theory in her book, which is about the underpinnings of a field of advanced mathematics called “category theory”, she does use a distinctly feminine central metaphor to explain her branch of mathematics: cooking.

Cooking is all about taking specific materials and following a process to achieve an end result. Certain recipes must be followed rigorously, like baking a souffle and treating it gently so it doesn’t collapse. However, a lot of the time, a recipe is just a guideline that you can adapt as you see fit. How drastically can you change the ingredients to make a cake and still bake something that looks like a cake? What general, unalterable principles apply to baking a cake? In other words, what is the essence of cake-ness?

Cheng gets at a similar question in the heart of math. What rules does math really follow? What are some interesting situations in which breaking those rules produces revolutionary and useful results? The best cooks know what the rules are and how to break them; it seems like the best mathematicians also exhibit that love of experimentation.

Cooking is a metaphor that is baked in to most of the book. (Pun completely intended.) Each chapter starts off with a recipe of Cheng’s own design, and then segues into a discussion of an important mathematical concept that said recipe exemplifies. For example, here’s the recipe that opens chapter 5, which is all about the concept of generalization.

This may not look much like a traditional cake, but here’s what Cheng has to say about it:

I invented the olive oil plum cake to be gluten-free, dairy-free, sugar-free, and paleo-compatible. The only party guest who couldn’t have it was the one who was at that time only eating zucchini and ghee. Everyone said it was delicious, but when they asked me what it was, I didn’t know what to call it, because it’s not really a cake — it’s a generalization of a cake. It has things in common with a cake, looks like a cake, is made like a cake, plays the role of a cake, but is somehow not quite the same as a cake. It is useful in situations that an ordinary cake would not be able to handle.

This is the point of generalization in mathematics as well — you start with a familiar situation and you modify it a bit, so that it can become useful in more situations. It’s called a generalization because it makes a concept more general, so that the notion of “cake” can encompass some other things that aren’t exactly cakes but are close.

Cooking aside, Cheng uses several other everyday objects to help readers understand the finer elements of certain types of mathematics, like maps, clocks, lego blocks, and running a marathon. This helps demystify the topic, but only a little bit, since the concepts she’s trying to show us are so abstract. Cheng’s prose — friendly, pragmatic, ebullient — also goes a long way towards demystifying the more abstract parts of her discussion.

However, as How to Bake Pi progressed, I found myself skimming more and more over the heavily mathematical sections of the text. The culmination of the book is meant to provide laypeople with a basic understanding of what category theory is, but unfortunately the conclusion didn’t have as much of an effect on me as I anticipated.

As an adult, I’ve read books about mathematical theory from different contexts, like Symmetry by Marcus du Sautoy or King of Infinite Space, Siobhan Roberts’s incredibly enjoyable biography of Donald Coxeter. Making up for lost time, perhaps, from my wayward high school days when I got 60s in math compared to 80s and 90s in almost everything else.

I really do wonder what kind of person I’d be if I hadn’t let that cultural programming convince me that math was difficult and scary, and that as a girl I’d probably be better off studying “soft” topics like English and philosophy. I happen to make a pretty comfortable living despite focusing on writing and language in high school and university, but I wonder what it would be like to, like Cheng, combine two extremely different and extremely gendered modes of thought (math and cooking) into a central aspect of my life. However, I don’t know if this is something Cheng herself pays a lot of attention to.

Oh, and how was the cake, you might ask? Well, here are a few shots of the cooking in action: 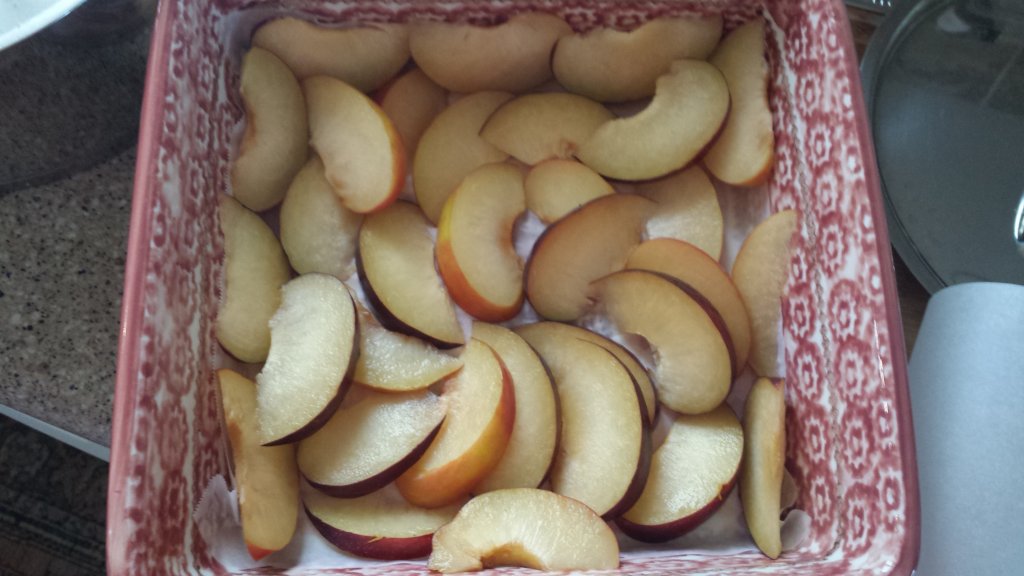 The sliced plums, ready to go. 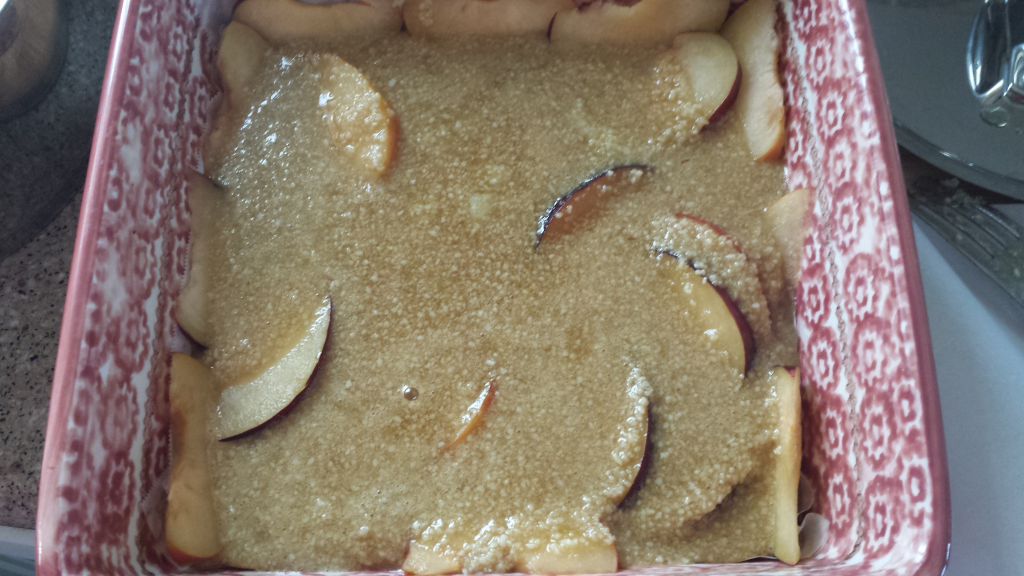 Here’s the almond/oil/ batter ready to go into the oven. 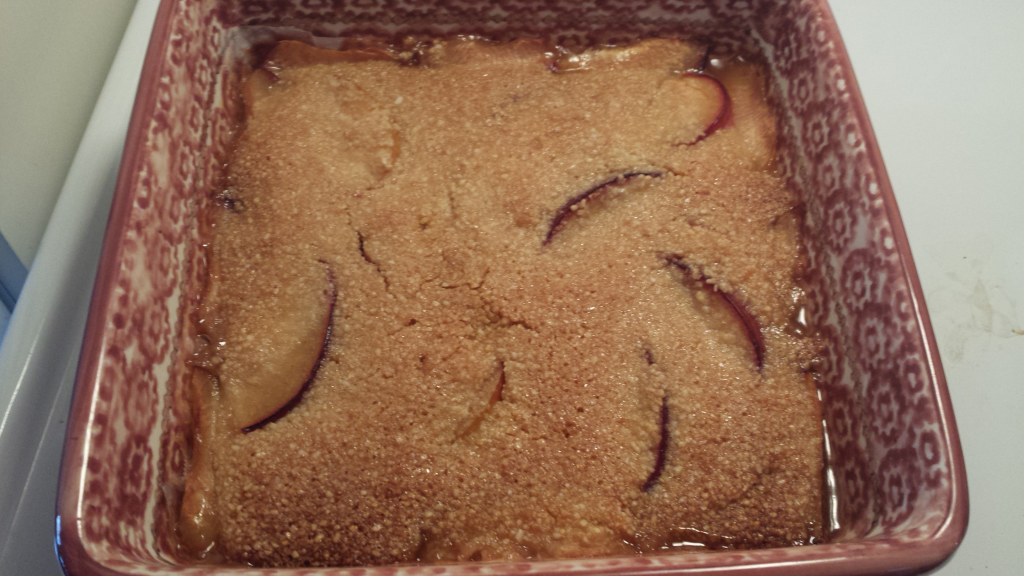 Olive oil plum cake, fresh out of the oven. 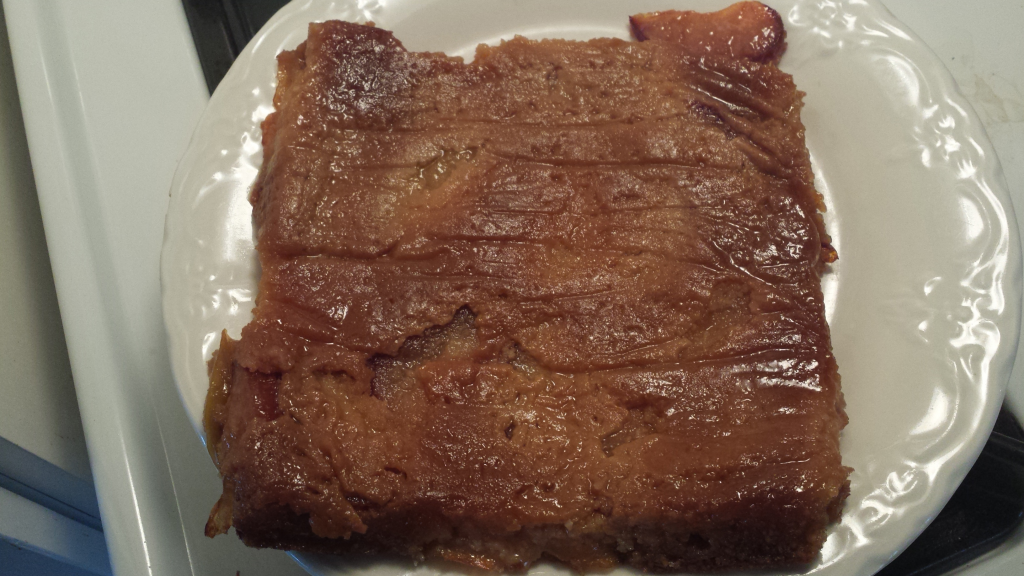 And voila, the finished cake after it’s cooled and been flipped over.

The cake was surprising. I had a hard time trying to convert the British recipe measurements (often based on grams/weight) to North American conventions (often based on volume), especially when it came to adding the almond meal. The resulting cake was incredibly sweet and soft, like a crumbly, extremely syrupy sponge cake. However, the olive oil added a nice amount of depth, and the tartness of the plums was a perfect complement to the sweetness of the batter.

On an even more apropos note, I read How to Bake Pi on Pi Day. Who knew abstract math could be this tasty?

I Love the Hamilton Musical, so Here’s a Hamilton Book Review

I'm Christina. I used to write mainly about SF/F, but the pandemic has eaten my brain. So now I post about cats, gardening, or whatever else strikes my fancy.